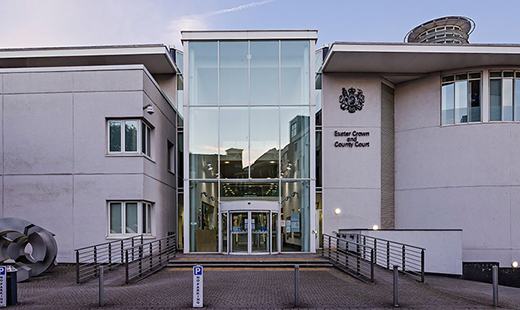 At the first hearing there can be a choice which of the Magistrates or the Crown Court to have your case heard. This needs good advice. This is a run down of the different criminal courts and the basic differences.

In Devon there are Magistrates courts at Exeter, Plymouth, Newton Abbot and Barnstaple. Trinity Advocates helps it’s clients at all of them but we are regularly at Exeter as the court duty solicitor. At any of the Courts the people deciding the cases might be lay Magistrates or a District Judge. Lay benchers are Magistrates who are not lawyers, have some training and often will have many years of experience judging those who come before them. District Judges are lawyers, paid to do their job and to run the Courts as effectively as the system allows. A defence lawyer will explain the difference if ever that is needed.

It is no coincidence that offences that can only be heard at the Magistrates Court are called summary only offences. Summary is what it is about. The emphasis  most often appears to be on getting the case through the system with as little hold up as possible.

The Magistrates are assisted by legal advisers, trained and experienced lawyers, who will direct them to the law and principles to be applied to the cases  they are deciding, but without giving their opinion on the case. If a defendant appears unrepresented before a Magistrates then in the absence of a District Judge the legal adviser will assist that defendant through the process. If a District Judge is sitting then that Judge will know the principles and law for themselves and the role of the legal adviser becomes more administrative.

Trials before the Magistrates are heard sooner than at the Crown Court and take less time. That might be right for the client defendant or it might not. Certainly at the end of a trial, if the case is proven against our client so the Magistrates are sure of guilt then the powers of imprisonment are less than a Crown Court Judge can impose. However, more and more now the Magistrates are encouraged to keep cases for trial before them even though they know they may yet send the defendant to the Crown Court for sentence if they find him guilty at that trial.  As far as this firm is concerned, if the defendant is at risk of being given a Crown Court Judge sentence then it is correct for the defendant to be given a Crown court jury trial first. We will be alert to this factor and advise the client and make the arguments before the Court that are necessary.

We know our courts and we know what to say and when to say it, to the best advantage of our clients. We will not shrink from telling the Court something challenging but we will also aim to keep the Court on side because we know we need the Courts goodwill in order to achieve the outcomes we want for our clients. We also have an obligation to be polite and respectful to each other in court. That is part of our expertise and skill.

As detailed in the “First hearing” section above, some cases end up at the Crown Court by choice. Sometimes they end up there just to be sentenced, sometimes for a trial, sometimes for an appeal against a decision made by the Magistrates. We always advise our clients whether to appeal such decisions in a timely way as any such appeal has to be notified within 21 days of the end of the case at the Magistrates.  We can advise if we represented the person at the Magistrates or not. Legal aid can be available for such appeals.

If our client has to chose whether to take their case to the Crown Court then there are several factors to bare in mind: Crown Court proceedings take longer and can be more stressful because they are a bit more formal, judges and advocates wear their gowns and wigs; Juries are generally regarded as being more open minded about finding defendants not guilty; A Crown Court Judge takes time and research before making decisions on what is lawful and what is admissible evidence – you might say the decision making is more rigorous and transparent.  These latter two points are big positives for taking a case before a jury trial if a defendant is determined to fight as hard as they can for a not guilty finding.

There are other factors to take into account: At the Crown Court the Prosecution usually take a careful, longer look at their case before proceeding and there seem to be more opportunities to sort out issues between the defendants’ and the prosecution’s case outside of the court hearing.   However if the defendant is found guilty after a trial then the Judge has the power to send them to prison longer than had the case been resolved at the Magistrates.  We would also point out that a Judge does not send someone to prison for longer  just because they can. Sentencing has some clear guidelines that are applied consistently. Even after a trial, if a Judge can see from the evidence that the case is not as serious as the prosecution suggested it was  when the case started, it is on the basis detected by the Judge during the trial that the Judge will sentence upon. There are a number of subtle differences that we will advise you on if you have to choose Crown Court or Magistrates hearing.

Juries are made up of ordinary, local people who usually sit on no more than 2 or 3 trials over a 2 to 3 week period they need to be available to sit. If a trial is longer (and there are not many of those in the South West) then the jury member will be asked to confirm they can be available for that time.  A jury member will not be able to sit on the trial if they know the defendant or witnesses involved. Juries decide for themselves at the end of the trial, based only on evidence and comment presented to them during that, whether they are sure of the defendants guilt. The judge tells them what law to apply and what in law they must ignore.  All the jury have to agree they are sure or not sure of guilt to reach a verdict. It isn’t for at least 2 and a half hours of the jury being given time to make their decision before the Court will take what is called a majority verdict- a verdict  that only 10 of the 12 people on the jury all agree to. It depends on the gravity and length of the case how soon after the 2 and a half hours the Court will say it will accept a majority verdict.

We like presenting our own cases before the Magistrates and the Crown Court. If a case gets before the Crown Court then the defendant client gets to choose who is the court room advocate. They can retain us as we have excellent high court advocates, or they can have a barrister represent them and we will act in the solicitor role only. We will always give an honest assessment of who is best to do the job in Court.  We have years of advocacy experience between us and we think we are accessible to our clients and we would not put ourselves forward to help if we believed another advocate would do a better job. Our clients’ decision on who represents them in the Crown Court hearing is key.

Local Crown Courts are at Exeter and Plymouth but this firm has served Courts all over the Country and more locally at Truro and Taunton. We like to think that we know our local courts and that gives us an advantage when helping out our clients.

Court of Appeal and Supreme Court

If after a Crown Court trial or a sentence there is reason to challenge the Court’s decision because it made a significant difference to the outcome and was in error then the advocate, whoever they are, will indicate clearly if an appeal has any merit. Such appeals have to be lodged within 28 days of the conviction or sentence.  If the client instruction is to appeal then we will assist as far as we are able, even up to presenting the appeal ourselves. Trinity Advocates was party to a very important appeal against a legal ruling during a trial to the Supreme Court and as a result of that appeal our client was acquitted of a very serious charge and the law on death by driving without insurance was clarified.

Crimes committed whilst in military service will generally be prosecuted using the same rules and procedures as in the civilian court and that person’s defence is funded by a very similar legal aid programme.  The tribunal deciding guilt or innocence is made up of three senior military personnel.  The nearest military centre to the South West is Bulford (near Salisbury). We have 20 years of experience of defending all stages military investigations and prosecutions.